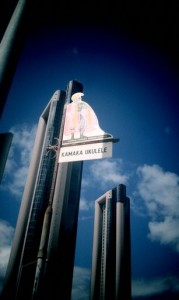 This Tuesday, I had the chance to take a tour of the Kamaka ukulele factory guided by Fred Kamaka Sr., whose father Samuel Kamaka founded the company in 1916. As a ukulele enthusiast, it was a real blast: Kamakas are some of the best in the world and have been the weapon of choice for, among others, Jake Shimabukuro and George Harrison. Even better than the factory and showroom, though, was getting a chance to hear Fred Kamaka tell all kinds of stories about growing up making ukes.

Fred is now 86, and he has been working for the company alongside his older brother Samuel Jr. since about 1930, when he was 5 years old. (On the tour, Fred shows a picture from that era featuring him at 5, working in a store full of ukuleles selling for $5.) It was common practice then, in Hawaii and throughout the country, that sons were workers. Before they started in school, they’d be expected to work all day for their fathers. Fred says he and his brother Samuel considered themselves lucky not to be the sons of bakers, who’d have to be up at 4 each morning to start baking!

Samuel Kamaka Sr., by his son’s description, was an exacting craftsman and didn’t accept cut corners. When the young Fred would make a mistake in the workshop, the botched ukulele would always be called “junk”, and would be thrown out. Fred describes hearing his father use that word “junk” throughout his life — from his deathbed, Samuel Kamaka Sr. insisted that his sons never use the family name on any junk.

Before that meeting, Fred and his brother had served in the military in World War II and were entitled to attend college on the G.I. Bill. They each decided to do that, much to their father’s disappointment: he was counting on them as workers! He cut them off, and they found themselves living on a $25/month allotment from the government, until they found another way to pull in some money.

Kamaka Ukulele continues to be a family business, but Fred and Samuel Jr.’s sons weren’t required to work in the factory growing up. Nevertheless, as ukulele playing became more popular among their friends, they found themselves attracted to the family business:

That generation is now grown, and have children of their own. All told, there are eight children in the next generation of Kamakas, the great-grandchildren of Samuel Kamaka Sr. Fred’s hoping at least four of them will come to work for the family business, now coming up on its 100th anniversary.

The Kamaka factory is a relatively small place, occupying two floors of a medium-sized building for the showroom, office, storage, and factory space. They sell instruments as quickly as they can make them, and new orders take about a month to fulfill. Each ukulele is made of the beautiful and uniquely Hawaiian koa wood, which can only legally be harvested from naturally fallen trees and is accordingly expensive.

Altogether, the Kamaka factory tour is a great one, and I recommend it highly. It’s so great to get to meet guys like Fred Kamaka, who are really living history. He runs the tour just about every Tuesday-Friday at 10:30 am — so if you find yourself around Honolulu then, go! Note that they don’t normally sell ukes from the showroom, and don’t sell factory seconds at all. I happened to luck out, and they had a couple for sale on orders that had dropped out, so my father and I each picked up an HF-2. I’ll be writing more about that soon…