Copying and creativity at day one of XOXO 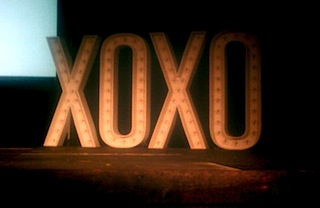 The talks at day one of the XOXO festival have been incredibly high quality: actual innovators and creators of disruptive media and technology have relayed their experiences of eliminating middlemen and charting new territory for success. It’s just amazing to see what a cool group of people have come together for this event.

One common theme within the talks has been the interaction between innovation, copying, and the effect of copyright and patents. More exciting, these creators have all arrived at a similar mindset and are able to articulate it well.

There were so many examples of artists and creators talking about the relationship between their own creativity and the influences of others.

Ron Carmen, the developer behind the game World of Goo, talked about how he learned video game development by copying a game he liked. “That’s what you do with things you like. You copy them.” Julia Nunes, the YouTube ukulele superstar, started by doing covers until she was writing original songs.

Dan Harmon, the creator of the TV series Community, was explicit about his influences in television and talked about how frustrating it was to work with television executives who didn’t know and breathe its common culture.

Copycats are frustrating, but not worth your time

Many of the talks acknowledged the problem that innovators face costs and risks that uncreative copycats do not, which can cause problems. The guys at Studio Neat showed a slide of a direct ripoff of the Glif, their iPhone kickstand and tripod mount that they funded through Kickstarter. Even the packaging was basically identical. They weren’t happy about it — even the slide was painful to show, they said — but came to the conclusion that their time was better spent innovating than trying to chase down the copycats. “Don’t spend your time chasing down copycats; make them chase you.”

Their story was not unique. Ron Carmen, the game developer, had plenty of experience with ripoffs, including from larger companies. Bre Pettis at MakerBot talked about companies that have taken their open source plans and cut corners to sell cheaper printers. On the other hand, a proliferation of 3D printers, and the corresponding creativity at scale, are good for them as a company. So the difficulty, he said, is releasing their plans in a way that “makes people copy, but encourages innovation.”

“Overrated” was the word the guys at Studio Neat used for patents. Patents aren’t a silver bullet or a magical force field against copying, and spending time in court is worse than spending time innovating. In their field, which moves fast, the first mover advantage is more important than a legal monopoly.

MakerBot’s Bre Pettis said that he always assumed the patent system would collapse before his company was big enough to have to deal with it, but now we’re “stuck with it.” His company makes printers that are between $1,000 and $2,000, but compete with $200,000 models. The companies that make those have patents that they are eager to enforce, making innovation in that space difficult.

Almost all of the speakers described a moment where their works “tipped,” and suddenly became much more popular. The ukulele player Julia Nunes had one of the best descriptions about how it doesn’t come in the form of “a big break,” but rather as many small leaps and opportunities, from being featured on the front page of YouTube to getting to open for Ben Folds to appearing on Conan O’Brien.

The other speakers had similar “breaks”: for Studio Neat it was John Gruber posting a link to their project on his website; for the creators of Indie Game: the Movie, it was Andy Baio tweeting about them. What these breaks have in common is that they were unforeseen, and the result of a piece of content making it into the right person’s hands at just the right moment.

So how do you facilitate that? None of the speakers said it directly1 but the surest way to be in the right place at the right time is to be all the places all the time. This is hard for people to do, but it’s easy for content: just make it easy to copy and distribute your work, and your fans will take care of the rest.

Cory Doctorow refers to this strategy as “thinking like a dandelion.” Instead of fretting and focusing on each copy, make as many as you can and make it easy for others to make them too.

One of the remarkable things about this conference has been the invigorating effect it has on my creativity. Seeing these people talk about making things — I want to make things! Thinking like a dandelion, and getting my creativity out there, seems like a great way to start.