Maira and I were walking around her neighborhood in Glen Park when we stumbled across a tiny road called Ohlone Way. It’s pretty charming. It’s properly marked as a street, but the entire length is unpaved, and not much wider than a single car across. It rained a few days ago, and the ground was still a bit muddy and marked with deep tire tracks. 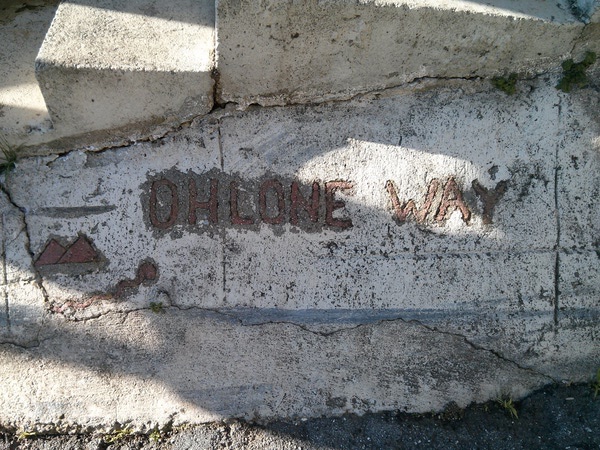 The name, it turns out, is something of a pun. “Ohlone” is a name used to describe some 40 different groups of Bay Area Native Americans. The groups spoke different languages, had different traditions, and in some cases weren’t even in contact with each other, but have been lumped together because of their geographic proximity. Still, “Ohlone” is preferable to the unwieldy exonym “Costanoans” — derived from the Spanish name for the people — which seems to have fallen out of favor in the 60s or so.

In 1978, an author named Malcolm Margolin published a book documenting the lives of these people who lived in the Bay Area before Europeans arrived, called The Ohlone Way. That book has since become pretty widely cited, and is still in print some 35 years later. FoundSF has published an excerpt from that book that provides a good introduction.

I don’t know how to find more history about this little street in San Francisco, but I’d be surprised to find out it wasn’t named after the book. In any case, it’s worth strolling down Ohlone Way if you find yourself in the neighborhood.