Like many around the web, I was struck last month by the obituary of Bell Labs engineer John E. Karlin, whose greatest legacy may be the keypad design on traditional touch-tone phones. (That is, the arrangement in a 3×3 grid with the 1-2-3 across the top instead of the bottom.) I had long heard the urban legend explanation that the arrangement was deliberately designed to slow down a population trained to quickly enter strings of numbers on calculators and cash registers and prevent them from overwhelming the phone system. It’s nice to hear that not only was there deliberate thought behind it, but real behavioral research.

(There are similar legends, too, about the QWERTY keyboard being developed to intentionally slow down typists to avoid jamming the keys. This is at least controversial and probably wrong.) 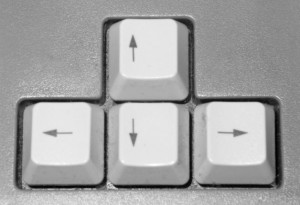 His story also reminded me of the creation of another well-known keypad arrangement: the arrow keys on computer keyboards. To me the familiar inverted-T seems like the only plausible arrangement, but there were actually a handful of different options in production for a while. Jim “Brons” Burrows was an engineer at DEC which developed the inverted-T keypad that later became the industry standard, and his first-person account of that development process is a really interesting read.