Earlier this week I was treated to a visit from some two dozen of San Francisco’s wild parrots, the cherry-headed conures that live on and around Telegraph Hill. It was pretty spectacular — I was sitting at the kitchen table by the window, and first one, then two, then maybe a half dozen landed right outside on my balcony, occasionally conferring with a larger group that had set down on the roof. 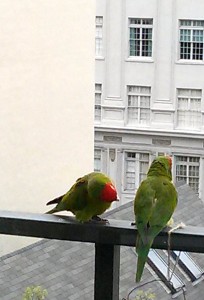 I had heard of these birds, but had never seen them for more than a few seconds as a flash of green coming out of a tree. I took all these pictures from the table with my phone, not wanting to get up and startle them, but they stuck around for some 20 minutes.

I hadn’t seen the documentary about them, though I had long been meaning to. I made a point to watch it last night, and enjoyed it, and it is definitely weird.