Psy — he, of course, of “Gangnam Style” fame — is back with a second video called “Gentleman.” A day into its existence, it’s pushing 30 million views. Anyway, there are a few shots of a pretty incredible location that caught my eye. Psy and his crew are dancing on a set of steps, surrounded by shelves full of books. 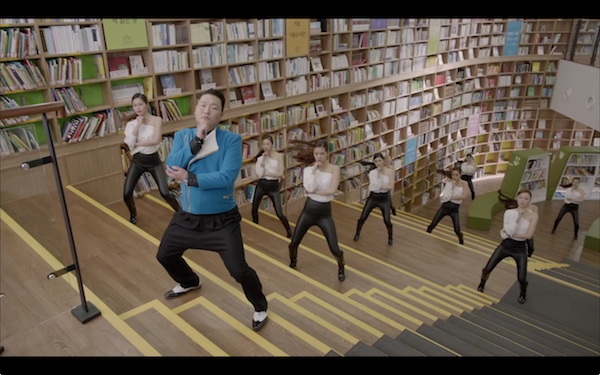 At first I thought this was a bookstore, but a little digging revealed that they’re dancing in the new Seoul Metropolitan Library, which is housed in the former City Hall building. That building was built under Japanese Colonial Rule in 1926, and later served as the headquarters for the municipal government until 2008. There were plans for the building to be demolished, but those plans proved unpopular.

In October 2012, Psy performed his free “thank you” concert in front of this building, drawing 80,000 fans and shutting down major parts of the city.

Later that month, it was re-opened as a library, and now houses 200,000 books on seven floors. It looks like a pretty incredible space.

As somebody on Twitter notes, though, the library’s about a 40-50 minute subway ride from Gangnam.