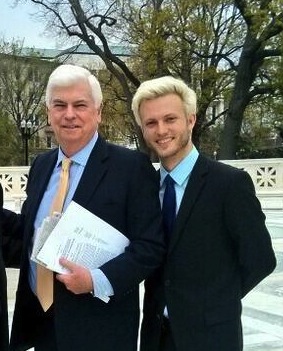 The Senator and I.

Michael Higgins was born in Knockanore, County Waterford, Ireland in 1814, and had some four or five children with his wife Margaret Geary. Between about 1865 and 1870, the couple and their children (separately) sailed for the US and settled in Pawcatuck, Connecticut.

One of their sons, Michael C. Higgins, married Mary Ann Burke in Connecticut. They had a son, C. Leo Higgins, who married Marie Rose Henry. Their son John Higgins was my grandfather. His eldest brother Leo died earlier this year, and there was a nice obituary in the Westerly Sun with some information about the pharmacy they ran.

Another of Michael Higgins’ sons, William Higgins, married twice. With his second wife, Mary McDonald, he had a daughter named Helene “Nellie” Higgins. Helene married John Murphy, and together they had a daughter Grace Murphy, who married Senator Thomas Dodd. Chris Dodd is their son.

My dad had indicated before that there was some familial connection, but I didn’t expect that we’d narrow it down like this. It feels a little more concrete to know that Chris Dodd’s grandmother’s maiden name was Higgins!

Given how frequently our organizations views differ, especially on copyright issues, it’s surprising to know we’re related however distantly. I guess I can see the resemblance, though.