I wanted a t-shirt in the style of the famous Experimental Jetset Beatles shirt, but with the traditional Alice & Bob placeholder names from crypto discussions. There were a few options for similar things—Bits of Freedom in the Netherlands has one that has Alice and Bob but also intelligence officials, and there are other designs online—but none was quite what I wanted.

Fortunately, it was easy to whip together a pretty convincing looking chunky white Helvetica list of names. From there, I used a company called Teespring, which lets you pick the printing threshold and retail cost. At first I just made the cut I wanted for myself—white text on a black men’s American Apparel shirt—but a bunch of my friends asked for women’s cuts, and it’s very clear to me in retrospect I should’ve made them in the first place. 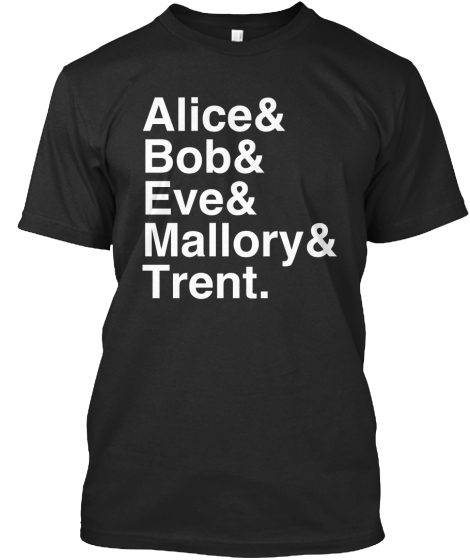 Both campaigns “tipped” in the first day online, so men’s and women’s t-shirts will be printed in the next few weeks. So far, 40 shirts have been sold—it’s definitely kind of remarkable to think that sprung from my off-hand idea.

I’ve gotten other shirts from Teespring and the quality is high, so I’m looking forward to wearing it. If you want one of these, get it quick!