Through some remarkably sharp eyes and impressive grid IDing, I learned that a crossword puzzle shown briefly on-screen on “Glass Onion: A Knives Out Mystery” is the June 16, 2022 New York Times puzzle constructed by me and Ross Trudeau. Some very very minor spoilers follow.

When we first re-meet Daniel Craig’s ridiculous southern detective character Benoit Blanc in this movie, he’s depressed in the bathtub, on a Zoom call with some notable puzzle/mystery celebrities. The film is set in May, 2020, and his detective business has been newly shut down by the pandemic. One celebrity on his screen asks if he’s tried crossword puzzles, which he rejects out of hand, despite the fact that several are strewn in front of him. 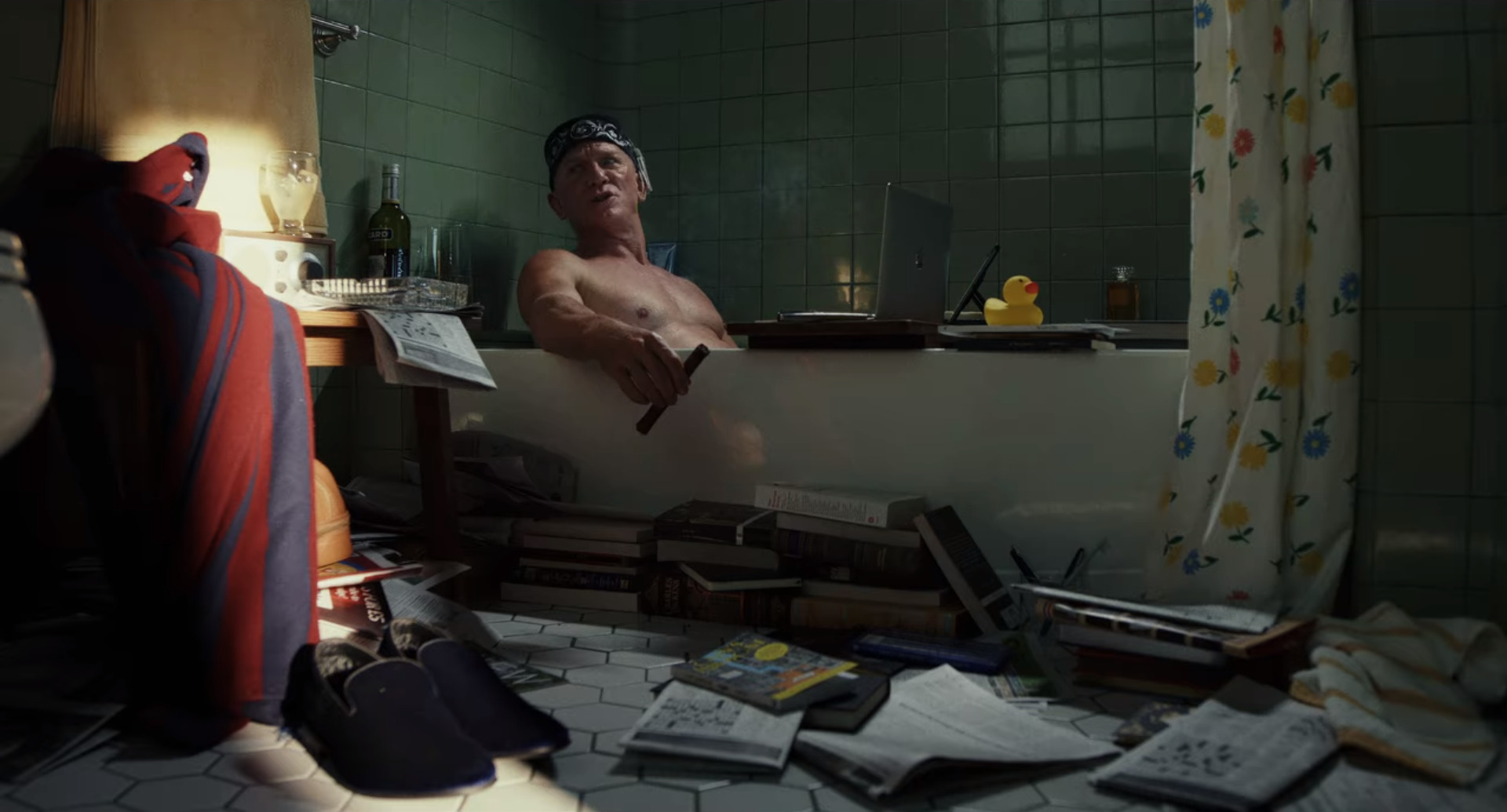 I happened to watch the movie in theaters and then again streamed at home, and the second time I noticed the crosswords. I didn’t even consider trying to identify them.

But then in a crossword Discord I’m in, Ben Zimmer posted a screenshot and almost immediately constructor Brian Thomas was able to identify both our grid and Pao Roy’s June 17, 2022 puzzle by the grid shapes. (Ours is a bit of an unusual grid, with left-right symmetry and a single spanner across the third row, but still, it’s an amazing feat of identification.)

See what he was working with, from the bottom right above: 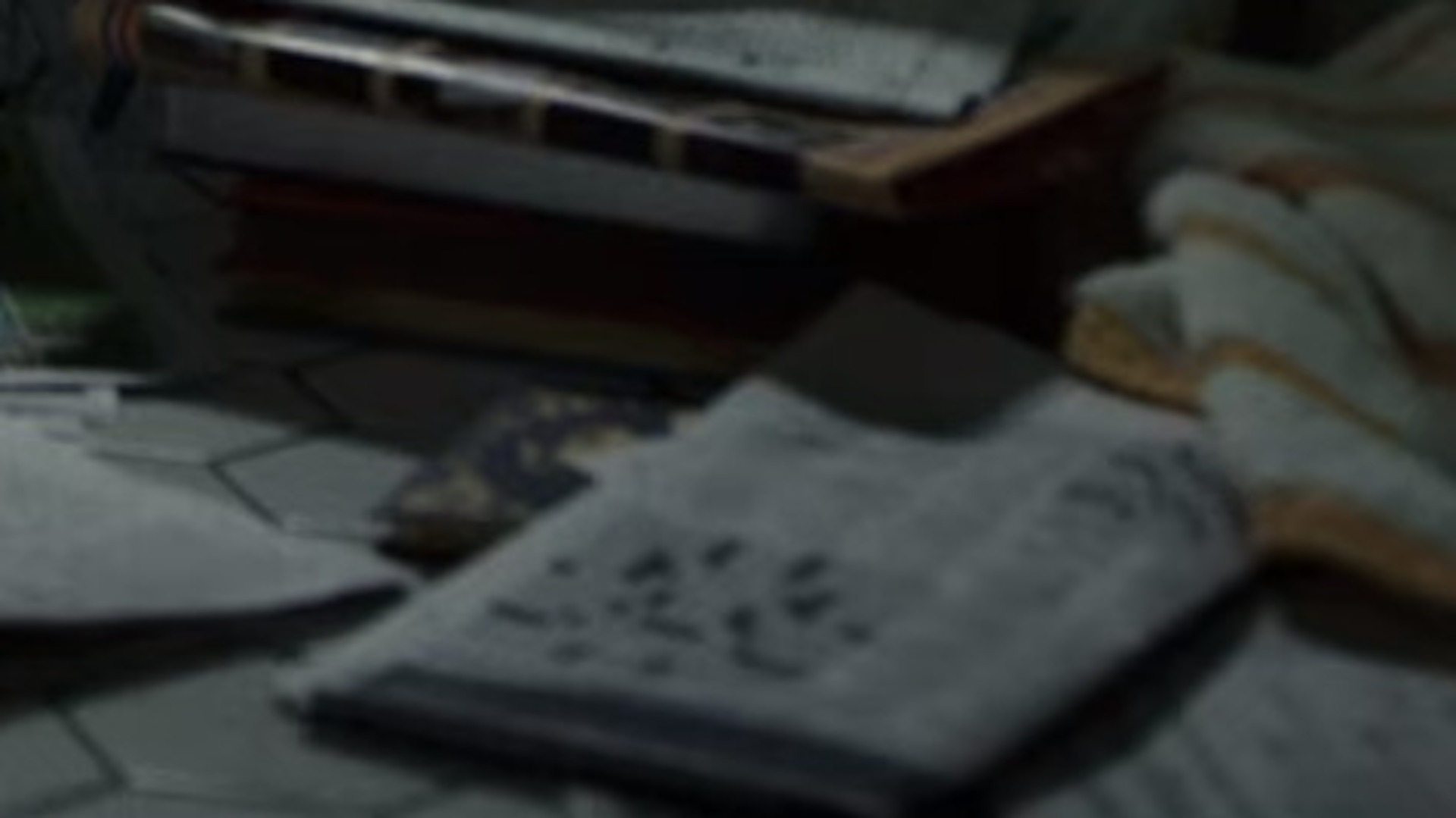 There’s still a little mystery about why crosswords from mid-2022 would appear here, given that the film was wrapped in September, 2021, but if I had to speculate I’d guess that they needed to revise some of the dialog in light of the circumstances of the on-screen cameo appearances.

I constructed today’s Los Angeles Times crossword puzzle — my first for a paper that my family has subscribed to for my entire life. The puzzle will be available for a week or two on the LA Times crossword page, maybe a bit longer in the archives for Puzzle Society members, and should be downloadable with a quick xword-dl lat -d 12/14/22 for a good long time. Some spoiler-y notes below!

This puzzle was in the works for a while, and the version of the grid published today is way different from what I originally submitted. That version featured a punny revealer, mostly different themers, and more traditional rotational symmetry. I’m proud of that grid, pictured here, but it didn’t quite line up with the editorial vision at the LA Times, and they asked for some revisions that required architectural changes.

With crossword themes, you’re usually shooting for “tightness”1 and “consistency.”2 But as with Set rules, you can get credit for “consistent inconsistency.” One thing I liked about my earlier theme set is that each of the paired nos worked a little differently.

I wasn’t sure there would be a way to rework the puzzle and save the concept, but after a bunch of tinkering and staring at the grid, the idea of using diagonal symmetry (a hip and edgy option employed lately to great effect by Brooke Husic and others) occurred to me. In my opinion it’s a perfect match for the content.

Throughout, I was lucky to be using some new beta construction software called Ingrid by Ryan Fitzgerald. Ingrid does a few things that were huge on this puzzle: it supports diagonal symmetry out-of-the-box, it has a built-in mechanism for “versioning” a puzzle through different revisions, and allows constructors to easily exclude word options for a given slot and see what remain for the rest of the fill.

That last one is big for avoiding heart-breaking dupe situations. For example, I didn’t want NO to appear anywhere in the grid outside of the theme. Ingrid helped me steer clear of that without having to futz with my actual wordlist or filling most of a corner only to realize I was approaching a dead end.

Anyway, I hope you enjoyed the puzzle! I had a great time making it.

I watched a few episodes of the new Netflix show Wednesday. Show’s fine, and the Danny Elfman score is interesting, and I laughed when his theme first started playing and was dutifully described in the subtitles as “jauntily macabre.” If you want jauntily macabre you have to go to Danny Elfman, right?

As the show went on, I noticed that a lot of care went into the musical descriptions, so I pulled them out to look at the whole collection.1

Some very fun ones in here! I like “delicate, cryptic”, “whimsically morbid”, “quirkily dreary”, “twinkling, wondrous”, “groovy, kooky”. The final cues before the last episode’s closing theme are “tender, wondrous”, “gentle, quirky”, into “grimly grandiose”. I haven’t seen enough of the show to know whether you could follow any of the plot through these descriptors, but I bet you almost can.

I’ve put the full list of 255 music descriptors up on Github, but as a sample here’s all of the second episode:

Jauntily macabre indeed. I do sort of wonder at what point in the creative process those were selected. (Like: did Danny Elfman get a note that they’re looking for a “whimsically morbid” piece for that section, or did he write a piece that somebody downstream clocked as whimsically morbid?)

Tooting from the intersection of art and technology

I’ve finally taken the plunge at set up my own Mastodon instance at a dedicated domain, as has been foretold by the prophesy of my recent posts. Instead of using one of the very fun subdomains I surfaced in classic literature, though, I found one that plays on the goofy meme-y phrase about “the intersection of art and technology.” And so, my new Mastodon instance lives at tech.intersects.art. The plan is to offer accounts to a handful of friends—never a big general purpose server, but hopefully developing something adjacent to a group chat.

When I posted about the move, somebody on Twitter asked about the benefits of a smaller server, and I found myself writing enough that it seemed like a good thing to bring over here. This list is a little loosey-goosey, but maybe it will be useful to somebody considering making the mover.

Given all these benefits, I’d been casually hoping to migrate servers for a while now, and certainly since it became possible to transfer existing followers. I’m excited to be starting this chapter of my Mastodon usage now.

I was surprised and delighted by the pick-up to my little host-finding script this last week, but I had to crank the surprise-and-delight meter up a notch today when Ed Summers messaged me on Mastodon to let me know that he’d done a bunch of cool work polishing and packaging that script. That description is a little generous, too: Really, Ed came in and made a real project out of a pretty thin idea, and I’m very grateful for it.

So now! “public_domains” is live and even available on on PyPi for pip installation, and the new version improves on my idea in a bunch of ways. whois checking, which had been a bit flaky and required a bunch of network connections, is now optional, improved, and has a progress bar. And just today, Ed added the ability to search Project Gutenberg for a title and check for possible hosts in the first matching result. Very fun.

As an aside, keen observers may note that the my previous post on this topic was the first blog post I’d put up here in years. In the meantime, too, I’ve done some behind the scenes work such as moving this site from Wordpress to Jekyll.

I’d already been giving some thought to relaunching this site to catalog my thoughts and work in a place of my own, and that feeling has been deepened as Twitter is under whatever tumult it’s currently facing. I have to say, somebody like Ed coming along and building on a bit like this really feels like the best-case scenario, and a fun throwback to earlier blogging days. We’re back!